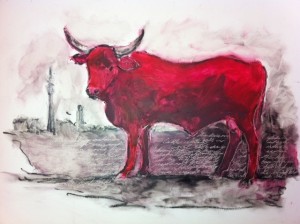 A whole lot of bull, being bullish, bulls and bears, bull headed, bull in a china shop. I’ve spent a lifetime drawing horses. Lately, though, I’ve developed a fixation with painting bulls. Specifically Nguni bulls, which are indigenous and beautiful and replete with cultural significance. I have an Nguni cowhide in my art studio so it’s only appropriate that I should start incorporating them into my cityscapes.

Cattle have a history in Africa going back thousands of years, and the relationship between the Zulu and their herds is legendary. Marguerite Poland documented the many different coat colours and the names they have been given in The Abundant Herds, a magnificent volume I’m determined to own one day. 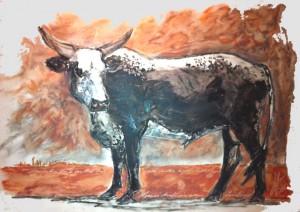 Beyond that, the bull has long figured in many different cultures, from Assyrian winged bulls – the ones on display in the Louvre are the most astonishing things I have seen in any museum – through the minotaur of Greek myth, the black bulls of Spain and the Camargue (the South African poet Roy Campbell was a bullfighter in Spain  and wrote poetry about the latter), as well as the bulls and the bears of the stock market. No other creature embodies the male principle quite so forcefully as the bull. Unlike horses, which in their elegant beauty appeal so strongly to women, a bull lives in an avowedly masculine universe. It’s no wonder that a bull features in the most controversial ritual of the Zulu, the Ukweshwana festival, where young men kill a bull with their bare hands, so transferring its power to themselves.

In this small painting of a black Nguni bull, I refer to the ukweshwana ritual and the clash between Western and traditional culture.

As a meditation on capitalism and its association with male power, I like the irony of using lipstick as a medium. It adds a layer of meaning which subverts the surface interpretation (money, power) while still working purely on an aesthetic level. In almost all of my work, I try to create something that will look good on a wall, but also prompt the viewer to reflect on the meaning of the piece, and hopefully notice something new about it every time.

One thought on “The painted cattle of Africa”